With the release of a BOINC app for Android, smartphone and tablet users can now join World Community Grid, or add their Android devices to an existing account. 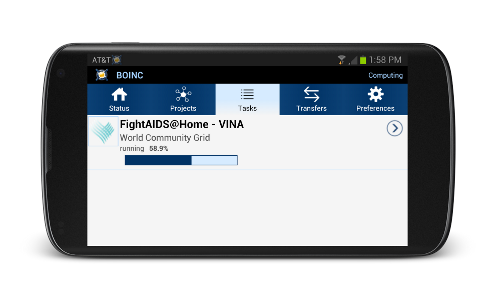 This development makes sense because of the rapid rise of mobile computing. When World Community Grid was launched in 2004, an average desktop computer might have had a 2 GHz processor and 256 MB of RAM. Nine years later, many mobile devices such as smartphones and tablets are just as powerful.

And there are a lot of them. There will be nearly 2 billion smartphones in use worldwide by the end of 2013, and the tablet market is growing rapidly as well, with tens of millions already in use. Android is the most popular operating system, which means that over a million new Android devices are activated every day. These mobile devices represent a huge and unprecedented amount of computing power in the hands - quite literally - of individuals all over the world.

These devices have transformed peoples' lives, as many readers will know from experience. But now, these powerful portable devices can help save lives by accelerating vital research into areas such as disease, energy, and the environment.

The World Community Grid team has worked hard to ensure that volunteers can donate mobile device processing time as easily and unobtrusively as they donate computer processing time. Because mobile devices are designed for portability and extended battery life, the app is designed to minimize the impact that World Community Grid will have. By default, the app will only run calculations when the device is plugged in and charging (for example, overnight) and will only transmit data over WiFi (settings are configurable).

Be one of the first to participate in an entirely new phenomenon: mobile volunteer computing. Put your phone or tablet to good use! If you are not already a member join World Community Grid now, or if you are already a member, download the app on your Android device.