News
News Article
My News
Decades of Discovery: Here’s to the next 10 years of humanitarian science


We’ve reached the end of our six-week decade of discovery celebrations - marking 10 years of scientific success. Since October, we’ve been revisiting key projects from the last decade and highlighting some of the fantastic achievements that you’ve helped make possible. We’ve also been running a competition to encourage more people to join World Community Grid. We’d like to thank you again for your support and remind you why it’s so important to keep spreading the word... 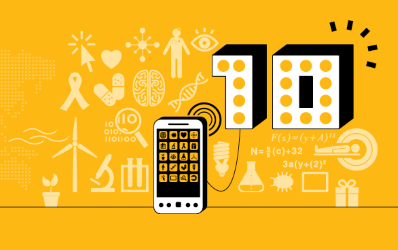 Our 10-year anniversary celebrations kicked off with a look at the Uncovering Genome Mysteries project. This ambitious initiative launched last month to help scientists unearth some of the hidden superpowers of the natural world by examining big genomic data. And there are many secrets out there: tiny, diverse organisms are continually evolving and can provide valuable insights into how to deal with serious humanitarian issues such as drug-resistant pathogens, pollution and energy shortages. The project is expected to power 20 quadrillion genetic comparisons of previously unstudied organisms. Learn more here.

The second initiative we looked at was The Clean Energy Project. This launched on World Community Grid in 2008 to help advance the development of solar cells from carbon-based materials - a cheaper and more flexible alternative to traditional silicon-based techniques. So far, we’ve helped researchers identify over 35,000 compounds with the potential to double carbon-based solar cell efficiency. There are many more to explore that could efficiently generate electricity from sunlight and provide a cheap power source for more than two billion people worldwide without access to electricity. Find out more here.

In this video, Dr. Alán Aspuru-Guzik of Harvard University, lead researcher of The Clean Energy Project, explains that this technology could act “as a cheap power source for more than two billion people worldwide without access to electricity.”

For week three, we channelled our efforts into creating a cancer-free future. We celebrated the success of the Help Fight Childhood Cancer project, which was set up to tackle neuroblastoma - one of the most common and dangerous forms of cancer in children. While the project was running, World Community Grid volunteers powered the screening of over three million drug candidates for the disease - and helped researchers identify seven that show great potential for development into new therapies. To read more about this breakthrough that could save many young lives, click here.

We continued with the theme of tackling cancer in week four by showcasing the success of the Help Defeat Cancer project - launched in 2006 to help develop a new tool for diagnosing and treating cancer with precision medicine. Thanks to the support of more than 200,000 World Community Grid volunteers, researchers were able to study over 100,000 patient tissue samples and proved that computer-based analysis can help doctors identify subtle patterns in individual cancers and tailor effective treatment for their patients. Click here for more.

And finally, last week we revisited Discovering Dengue Drugs - Together, which ran on World Community Grid from 2007 to 2009. The project’s mission was to search for drugs to help combat dengue - a devastating tropical disease that threatens 40% of the world’s population. World Community Grid volunteers powered a computer-based discovery approach and the identification of several proteins that show potential to stop the mosquito-borne disease in its tracks. For more, click here.

All these cutting-edge projects would not have been possible without the computing power donated by volunteers like you. In order to power more humanitarian research projects like these, it’s vitally important that we continue to raise awareness and get more people to join World Community Grid.

Thank you again for your continued support and stay tuned for the launch of another significant project on World Community Grid in the coming weeks.

Please be sure to go to your My Projects page and make sure you are contributing to one or more of the active projects running on World Community Grid!

Here’s to another decade of discovery.