The GO Fight Against Malaria team has just published a paper in which they describe an unexpected benefit of their research: they’ve identified two compounds that could advance the future development of new drugs to treat tuberculosis, including drug-resistant tuberculosis. These results open up a new front in the fight against tuberculosis, which is constantly evolving to resist existing treatments. 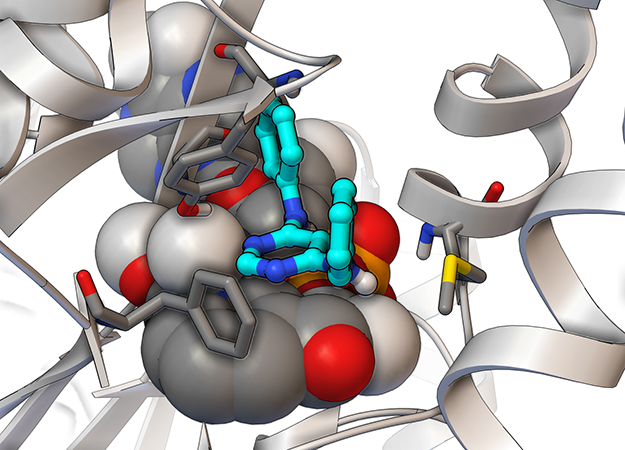 New fragment-sized inhibitors of the TB drug target called "InhA" were discovered in GO FAM experiment 5. The cyan ball-and-stick molecule in the center shows the predicted binding mode of the most potent inhibitor we discovered, while the InhA enzyme it inhibits (which was the target of the docking calculations) is shown in grey.

As part of the GO Fight against Malaria (GO FAM) project, some of the calculations performed using the power of World Community Grid were applicable to Tuberculosis. These calculations identified several chemical compounds which have the potential to facilitate the future development of new types of compounds to help with the fight against Tuberculosis, a bacterial disease that kills 1.5 million people each year and is becoming more resistant to established drug treatments. Further laboratory testing shows that two of these compounds could possibly pave the way to the development of new drug treatments that would not be disabled by a prevalent form of drug resistance that has emerged in tuberculosis. This is good news considering that Tuberculosis is on the rise and kills more people than any other bacterial disease.

Technical Abstract from the Paper:

"Isoniazid (INH) is usually administered to treat latent Mycobacterium tuberculosis (Mtb) infections, and is used in combination therapy to treat active tuberculosis disease (TB). Unfortunately, resistance to this drug is hampering its clinical effectiveness. INH is a prodrug that must be activated by Mtb catalase peroxidase (KatG) before it can inhibit InhA (Mtb enoyl-acyl-carrier-protein reductase). Isoniazid-resistant cases of TB found in clinical settings usually involve mutations in or deletion of katG, which abrogate INH activation. Compounds that inhibit InhA without requiring prior activation by KatG would not be affected by this resistance mechanism and hence would display continued potency against these drug-resistant isolates of Mtb. Virtual screening experiments versus InhA in the GO Fight Against Malaria project (GO FAM) were designed to discover new scaffolds that display base stacking interactions with the NAD cofactor. GO FAM experiments included targets from other pathogens, including Mtb, when they had structural similarity to a malaria target. Eight of the sixteen soluble compounds identified by docking against InhA plus visual inspection were modest inhibitors and did not require prior activation by KatG. The best two inhibitors discovered are both fragment-sized compounds and displayed Ki values of 54 and 59 µM, respectively. Importantly, the novel inhibitors discovered have low structural similarity to known InhA inhibitors and, thus, help expand the number of chemotypes on which future medicinal chemistry efforts can be focused. These new fragment hits could eventually help advance the fight against INH-resistant Mtb strains, which pose a significant global health threat."

To see a short animation related to this published paper, please click here.