News
News Article
My News
A milestone and a roadmap: progress in the fight against Ebola


Thanks to the huge level of support from World Community Grid, the team at the Scripps Research Institute has already received most of the matching data for the first target protein of the Ebola virus. While this data is being analyzed, the search now moves to another related protein with potential to help the fight against hemorrhagic fevers.

Outsmart Ebola Together, a long-term scientific project whose goal is to find new drugs for curing Ebola and related life-threatening viral hemorrhagic fevers, is still in its early stages, but we've already reached a major milestone. Our first target was the newly revealed receptor-binding site of the Ebola surface protein, GP. GP is the molecule Ebola virus uses to fuse with a human cell and force its way inside. Armed with a new model of the binding site, and with the vast resources of World Community Grid, we set out to test this site against drugs that could potentially bond with it and prevent Ebola infection. This stage of work is now close to complete:  we have received back from World Community Grid most of the data for the planned matchings of the Ebola surface protein against 5.4 million candidate chemical compounds.

We are now analyzing this data. Drugs that simulations predict will bind well with the Ebola surface protein will go on to a next round of experiments, conducted in the lab with actual proteins and actual drug molecules. Our analysis may also yield general insights about how classes of drugs interact with viral proteins.

Moreover, we are excited to announce that we are beginning work on a second target protein, the Lassa virus nucleoprotein.

Like Ebola, Lassa is a "Group V" virus: in other words, both are viruses that have at their core a genome composed of "negative-sense", single-stranded RNA. Both viruses produce a deadly hemorrhagic fever. While Lassa has received less publicity than Ebola, it is a more consistent killer. There are hundreds of thousands of cases of Lassa Fever every year in Western Africa, with tens of thousands of deaths. It is also the viral hemorrhagic fever most frequently transported out of Africa to the United States and Europe. There are no treatments approved for use in Lassa virus infection. Identification of a potent inhibitor of Lassa virus is imperative for public health.

The Lassa virus's nucleoprotein (NP) is so named because its first discovered function is to bind with, and so enclose and protect, the virus's central strand of RNA. However, Lassa NP is a complex beast that has other functions as well. In particular, our lab discovered that the NP (almost paradoxically) is also responsible for digesting double-stranded RNA (dsRNA) created by the virus itself. Having gained entry to a human cell, the Lassa virus must copy its single-stranded RNA in order to produce viral proteins and replicate itself. This requires creating double-stranded RNA. However, the virus must keep this work secret. The presence of double-stranded RNA in the cytoplasm is a clear sign of a viral infection, and human cells are smart enough to detect this, triggering an effective immune response. Hence the importance of the Lassa NP, which rips apart the virus's own dsRNA byproducts in order to keep its activities secret.

We approach Lassa NP armed with our lab's crystallographic structures, which clearly identify the shape of the NP and the site where the NP carries out its function of destroying double-stranded RNA. This site is a large cavity in the side of the protein; it is negatively charged, but is also bordered by a positively charged, protruding protein "arm". These distinctive features are key to the site's binding with dsRNA, and, we believe, should make it a good candidate for screenings against possible drugs.

Figure: Our lab's structure for the Lassa NP protein. Portions important to the protein's function of digesting double-stranded RNA include the "cavity" (glowing, particularly a manganese atom that helps bond RNA) and the adjacent "arm" (yellow). 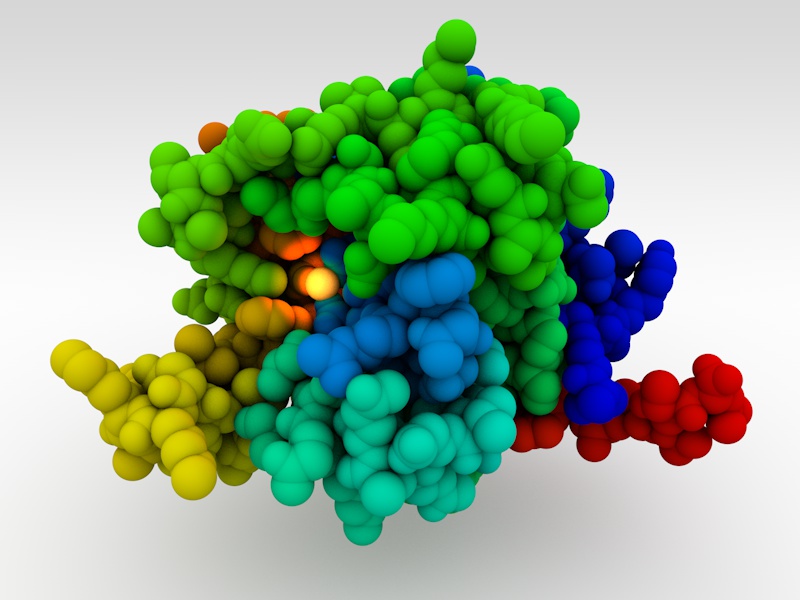 We will now prepare this target protein for matchings against millions of drugs using the resources of the World Community Grid. As with our previous matchings against the Ebola surface protein, drugs that do well in this "virtual screening" will go on to further tests with actual proteins in the lab. While this work is difficult and carries no guarantees, we hope that it will lead to the discovery of a drug that can prevent the Lassa NP from hiding the virus's double-stranded RNA. We have already determined that doing this would allow human cells to detect and act against the Lassa virus more promptly and effectively, potentially saving lives.

It’s amazing to us that we’ve been able to receive so many results so quickly, and we want to say thank you to everyone in the World Community Grid family who helped make this possible. There is much work ahead, but it’s immensely encouraging to know that we have the resources available to carry it out.