The Zika virus was relatively unknown until 2015, when it made headlines due its rapid spread and its link to severe brain-related deficiencies in newborns born to mothers who contracted the virus while pregnant. Dr. Carolina Horta Andrade, the principal investigator for the new OpenZika project, discusses how she and an international team of researchers are using World Community Grid to accelerate the search for an effective anti-Zika treatment. 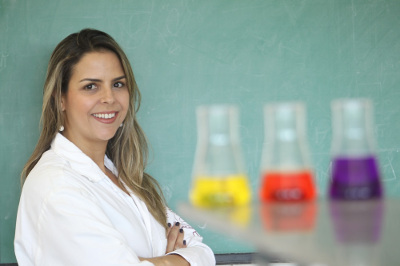 Few people had heard of the Zika virus before 2015, when it began rapidly spreading in the Americas, particularly in Brazil. The virus is mostly spread by Aedes aegypti mosquitoes, although sexual and blood transmission are also possible. A currently unknown percentage of pregnant women who have contracted the Zika virus have given birth to infants with a condition called microcephaly, which results in severe brain development issues. In other cases, adults and children who contract the Zika virus have suffered paralysis and other neurological problems.

Currently, there is no treatment for the Zika virus and no vaccine. Given that Zika has quickly become an international public health concern, my team and I are working with researchers here in Brazil as well as in the United States to look for possible treatments, and we are using World Community Grid to accelerate our project.

The world has become increasingly alarmed about the Zika virus, and with good reason. Until recently there has been little research on this disease, but in the past few months it has been linked to severe brain deficiencies in some infants as well as potential neurological issues in children and adults. As a scientist and a citizen of Brazil, which has been greatly affected by Zika, I am committed to the fight against the virus, but my team and I will need the help of World Community Grid volunteers to provide the massive computational power required for our search for a Zika treatment.

I am a professor at the Universidade Federal de Goiás (UFG) in Brazil, and the director of LabMol, a university laboratory which searches for treatments for neglected diseases and cancer. My field is medicinal and computational chemistry, with an emphasis on drug design and discovery for neglected diseases. I first became interested in working in this area because these are diseases that do not interest pharmaceutical companies, since they mainly affect marginalized populations in underdeveloped and developing countries. However, these diseases are highly debilitating and, for most of them, there is no adequate drug treatment. Brazil is vulnerable to a number of neglected diseases, such as dengue, malaria, leishmaniasis, schistosomiasis, and others. My greatest desire is to find treatments to improve the lives of thousands of people throughout the world who suffer from these diseases.

In 2015, I started a project in collaboration with Dr. Sean Ekins, a pharmacologist with extensive research experience, to focus on the development of computational models to identify active compounds against the dengue virus, which is a serious mosquito-borne disease found throughout the world. These active compounds could become candidates for antiviral drugs. We are now at the stage of selecting compounds to start laboratory tests. In January of 2016, when the Zika virus outbreak in Brazil became alarming, Sean and I decided to expand our dengue research, and we included the Zika virus in our work, since these two diseases are from the same family of viruses. 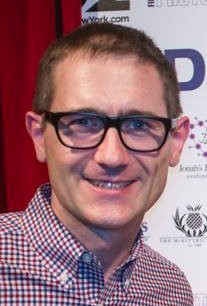 Dr. Sean Ekins, CEO, Collaborations Pharmaceuticals, Inc.
Sean invited me and other collaborators to write a perspective paper that was published in the beginning of 2016, about the need for open drug discovery for the Zika virus. This work grabbed the attention of scientific illustrator John Liebler, who wanted to produce a picture of the complete Zika virion. We are using the illustration he created (shown below) as a visual for the OpenZika project. 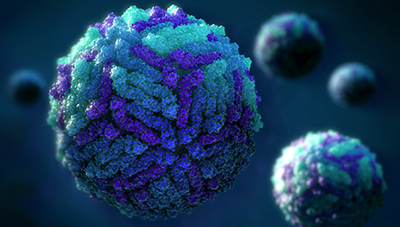 Image copyright John Liebler, www.ArtoftheCell.com. All rights reserved. Used by permission.
John's interest inspired us to try to model every protein in the Zika virus, which directly led to writing a groundbreaking paper with homology models of all the proteins of the Zika virus. (Homology models, which are computational, three-dimensional renderings of proteins within an organism, are useful when the structure of a protein is not experimentally known, which is the case with the Zika virus.)

After Sean and I began our work on the Zika virus, he introduced me to World Community Grid. Sean has also collaborated with Dr. Alexander Perryman of Rutgers University, New Jersey Medical School, who was previously at The Scripps Research Institute where he played a key role in two World Community Grid projects: Fight AIDS@Home and GO Fight Against Malaria. Sean and Alex are both co-principal investigators with me on the OpenZika project. 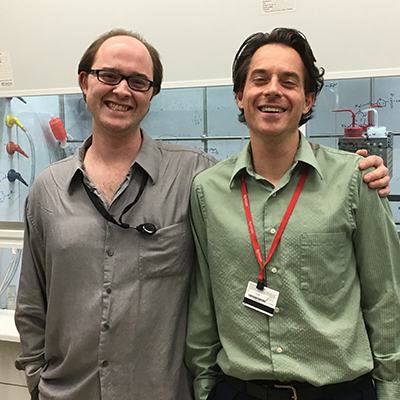 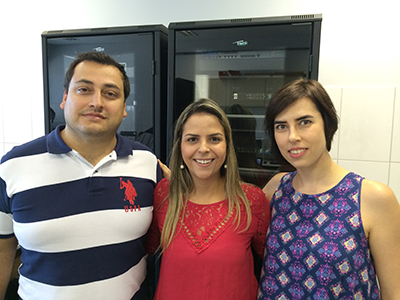 The UFG team includes Dr. Rodolpho Braga, Dr. Carolina Horta Andrade, Dr. Melina Mottin and Dr. Roosevelt Silva (not pictured).
This large group of collaborators means that the team has every set of skills and experience necessary to conduct this research end-to-end, as some of the researchers are computational modeling experts while others have extensive laboratory experience.

The OpenZika project on World Community Grid aims to identify drug candidates to treat the Zika virus in people who have been infected. The project will use software to screen millions of chemical compounds against the target proteins that the Zika virus likely uses to survive and spread in the human body, based on what is known from similar diseases such as dengue virus and yellow fever. As science's knowledge of the Zika virus increases in the coming months and key proteins are identified, the OpenZika team will use the new knowledge to refine our search.

Our work on World Community Grid is only the first step in the larger project of discovering a new drug to fight the Zika virus. Next, we will analyze the data obtained from World Community Grid’s virtual screening to choose the compounds that show the most promise. After we have selected and tested compounds that could be effective in killing the Zika virus, we will publish our results. As soon as we have proven that some of the candidate compounds can actually kill or disable the virus in cell-based tests, we and other labs can then modify the molecules to increase their potency against the virus, while ensuring that these modified compounds are safe and non-toxic.

We are committed to releasing all the results to the public as soon as they are completed, so other scientists can help advance the development of some of these active compounds into new drugs. We hope that OpenZika will include a second stage, where we can perform virtual screenings on many more compounds.

Without this research--and other projects that are studying the Zika virus--this disease could become an even bigger threat due to the rapid spread of the virus by mosquitoes, blood and sexual transmission. The link between the Zika virus in pregnant women and severe brain-based disorders in children could impact a generation with larger than usual numbers of members who have serious neurological difficulties.

Enlisting the help of World Community Grid volunteers will enable us to computationally evaluate over 20 million compounds in just the initial phase (and potentially up to 90 million compounds in future phases). Thus, running the OpenZika project on World Community Grid will allow us to greatly expand the scale of our project, and it will accelerate the rate at which we can obtain the results toward an antiviral drug for the Zika virus.

By working together and sharing our work with the scientific community, many other researchers in the world will also be able to take promising molecular candidates forward, to accelerate progress towards defeating the Zika outbreak.


To contribute to OpenZika, join World Community Grid, or if you are already a volunteer, make sure the project is selected on your My Projects page.

This article is also available in Spanish and Portuguese.