A protein called HIV-1 capsid (CA), which is crucial to the replication of HIV, may have some recently discovered vulnerabilities.

Many people live with Human Immunodeficiency Virus (HIV), and do not get sick for many years. However, because the human body cannot generate antibodies that can eradicate HIV, it can slowly infect key cells of the immune system and impair their function or even destroy them. Eventually, HIV infection results in progressive depletion of a person’s immune system, leading to Acquired Immune Deficiency Syndrome (AIDS). The immune system is said to be deficient when it can no longer fulfill its role of fighting off infections and cancers.

HIV is difficult to stop because when it replicates, it does not do so perfectly and is thus continually changing. Scientists are studying HIV intensively to find ways to stop the onset of AIDS. The FightAIDS@Home project was created to search for drugs that can disable a key step in HIV's life cycle — specifically by blocking HIV-1 protease.

Proteins are the basic building blocks in all of life's functions. Proteins are long chains of smaller molecules called amino acids. Enzymes are particular kinds of proteins that accelerate biochemical reactions. A protease (pronounced "pro-tee-ace") is an enzyme that is able to cut proteins apart at some point along the amino acid chain. While only a small percent of all of the proteins in an organism are proteases, they are very important in the proper functioning of its life processes.

Not all proteases are good. HIV makes and uses a particular protease, HIV-1 protease, which it uses to make the virus's different proteins.

This is where ligands play an important role. Ligands are small molecules that come from outside the cell that attach, or "bind," to pockets in proteins. You can think of a ligand binding to its receptor like a key fitting into a lock. The FightAIDS@Home project specifically searched for ligands (drugs), which can attach to the HIV-1 protease receptor in a way that blocks its ability to function as an enzyme. This prevents the virus from spreading further in the body and developing into AIDS. Molecules that block HIV protease are called "protease inhibitors."

A protein called HIV-1 capsid (CA) is a structural protein crucial to the viral replication cycle as it encloses the viral genome. Its involvement in both early and the late stage of the infection led to efforts in developing antivirals targeting CA.

Structure and assembly of the HIV-1 capsid core. Capsid protein folds to form two domains connected by a flexible linker (A) and forms hexamers (B) and pentamers (red) in the mature core (C), which encloses the viral RNA and ultimately houses reverse transcription (D).

In a recent paper, the FightAIDS@Home research team detailed their findings on new, interesting, potentially druggable regions on the surface of HIV-1 capsid protein, which were then targeted with virtual screenings on World Community Grid to search for compounds capable of binding on these regions.

The structural characterization, biochemical and virological assays discussed in the paper show that the identified site could be amenable to antiviral targeting. 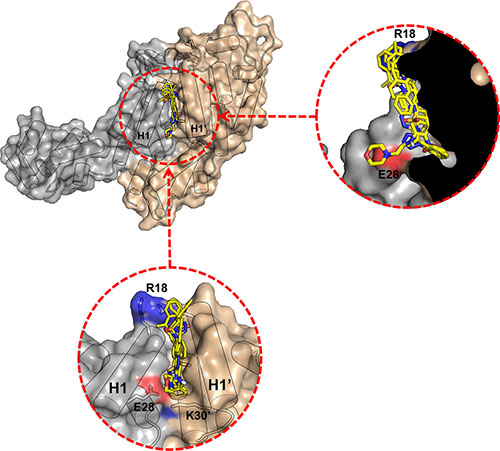 Top 5 compounds from a virtual screen of the NDI pocket. Docking results are shown as the superposition of five different molecules (yellow sticks) binding in the NDI pocket from the X-ray crystal structure of the native CA (PDB ID: 4XFX).

The paper, which you can read here, presents the data analysis and the details of the researchers’ findings.

Thanks to everyone who has supported this project.