Leishmaniasis is a disease caused by a protozoan parasite of the genus "Leishmania." It is transmitted by sand flies and causes skin lesions, with some forms affecting internal organs, possibly leading to death. The disease is a severe public health problem in 97 countries around the world, and is seen in other countries due to tourism. The disease affects more than two million people per year. In Colombia and Latin America the disease has increased so significantly that now Colombia is second only to Brazil in number of cases of Leishmaniasis in the Americas.

How is Leishmaniasis currently controlled?

Currently, control of the disease is accomplished primarily via chemotherapy and with measures to control the spread via insects and animals. The drugs used in the treatment of disease present problems of toxicity and other side effects. These adverse effects sometimes cause patients to discontinue treatment, which leads to drug resistance. In addition, the high cost of anti-Leishmania compounds is an inhibitor, because the disease is common mostly in developing countries.

How is Leishmaniasis transmitted?

Leishmaniasis is transmitted through the bite of sand flies of the genus Lutzomyia in the Americas and the genus Phlebotomus in other parts of the world. The female insects need blood meals to develop eggs, and in the process of feeding, infected insects inject the parasite into the new host.

What are the symptoms of Leishmaniasis?

Leishmaniasis is presented mainly under three clinical forms: cutaneous, mucocutaneous and visceral. The cutaneous form causes ulcerated lesions, but may also appear as warty lesions or spots. The mucocutaneous form causes cell death in mucous membranes, especially the nose and also the throat. The visceral form is characterized by infection of the spleen, liver, lymph nodes and bone marrow. This form causes anemia, clotting problems, weight loss, and enlarging of the spleen, liver and lymph nodes.

What treatments exist for Leishmaniasis?

Although pentavalent antimonials (commercially known as Pentostam or Glucantime) have been the drugs of choice to treat this disease, there have been frequent reports of treatment failure due to resistance by the parasite. In addition, these drugs can cause mild to severe adverse effects, including death. Second-choice drugs, such as amphotericin B, pentamidine and paromomycin, also have toxic effects, sometimes requiring hospital management. Miltefosine, an oral drug, is one of the compounds used recently in the treatment of Leishmaniasis, but its effectiveness has only been tested with some species of the Leishmania protozoans. Although its administration is oral and effective against some species of Leishmania, its prescription is contraindicated in pregnant women because of the potential of causing birth defects.

How many people are affected by Leishmania?

Are any animals involved in Leishmania transmission?

In some parts of the world, mice and rodents have been involved, while in other areas, some bears and foxes are often involved in transmission of cutaneous or mucocutaneous Leishmaniasis. Dogs seem to be the most important animal in the transmission of the visceral form of the disease.

The cutaneous and mucocutaneous forms are not fatal, but the visceral form of the disease may cause death if the patient is not treated properly in time.

What areas of the world are affected by Leishmaniasis?

Leishmaniasis is endemic in five continents: the Americas (from southern U.S.A. to northern Argentina), Asia, Africa and Europe (on the Mediterranean coast). Relatively recently, a case of Leishmaniasis has been discovered in Australia.

Is there a vaccine for Leishmaniasis?

Although there have been attempts to develop a vaccine against Leishmaniasis, there is currently no vaccine available.

What is the life cycle for the Leishmania parasite?

Leishmania is a parasite transmitted by the bite of a female sand fly of the genus Lutzomyia. The insect injects humans or other animals with promastigotes, the infective stage of the parasite. Once injected into the skin, the promastigote is consumed by immune system cells such as macrophages and other mononuclear phagocytic cells. Within these cells, the promastigote transforms into the tissue stage of the parasite, known as an amastigote, which multiplies inside the cell by simple division, moving on to infect other phagocytic mononuclear cells. Various factors of the parasite and host determine which form of the disease appears in the host. The insects become infected by sucking infected cells of the host during a blood meal. In the insect´s gut, the cells rupture, releasing amastigotes, which are transformed back into promastigotes. They multiply and develop in the gut. After several days, depending on the species, the parasites migrate to the mouthparts of the insect, where they are ready again to be transmitted to a host during the next blood meal.

What does the screensaver look like for Drug Search for Leishmaniasis?

Here is a video capture of the Drug Search for Leishmaniasis graphics:

Screen saver/Graphics: Where may I download pictures of the Drug Search for Leishmaniasis graphics?

You may get them by clicking the links for the resolutions below of the example screen shot. 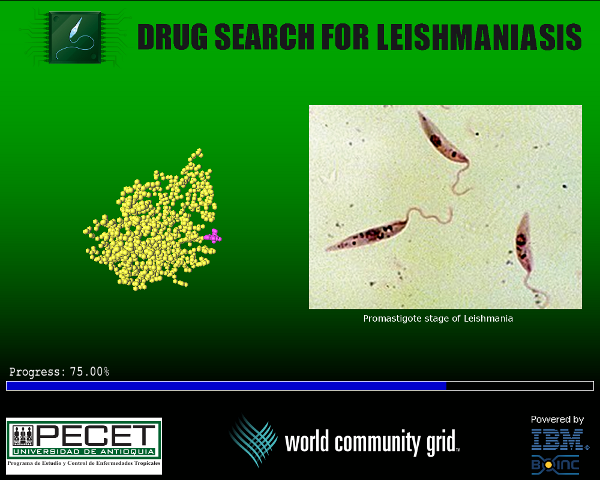 The left portion of the screen saver shows the target and drug candidate molecules, depicted with small spheres representing the atoms that make up the molecules. These are the molecules the program is working on with your device.

The right portion of the screen saver shows various images relating to Leishmaniasis with captions.

PECET is the logo for "Program for the Study and Control of Tropical Diseases" at the University of Antioquia, in Medellín, Colombia

How is my computing time helping fight Leishmaniasis?

There are many approaches that can help combat not only Leishmaniasis, but many infectious diseases, whose genome is sequenced and proteins annotated. Using computational methods or bioinformatics, it is possible to predict or identify molecules that are essential to the survival of these organisms, so they can be then evaluated as drug targets or vaccines. Furthermore, it is also possible to identify whether a drug could interact and inhibit an essential protein of the parasite, in order to kill it or to stop its multiplication. For the design of new drugs, it is very useful to identify molecular targets in microorganisms, and then based on these targets, to design new drugs or evaluate some previously synthesized and used for other purposes. The availability of complete genomes of several Leishmania species, one from the Americas (L. braziliensis) and two from other parts of the world (L. major and L. infantum) (GeneDB) will facilitate prediction of critical or important gene products, such as those involved in pathways or metabolic essential processes for the parasite Leishmania.