Say No to Schistosoma

Schistosomiasis is a tropical disease caused by parasitic worms of genus Schistosoma that is transmitted by freshwater snails. The disease kills 200,000 people each year and affects over 207 million people.

How is schistosomiasis currently treated?

Antimony, oxamniquine, mirazid, and metrifonate are drugs that have been used to treat schistosomiasis, but these drugs are either not highly effective, have been discontinued, or work against only certain forms of the disease. An orally administered drug called praziquantel is currently the best treatment for schistosomiasis. However, there is evidence that Schistosoma may become resistant to praziquantel.

How is schistosomiasis transmitted?

The parasite's larvae, released by freshwater snails, penetrate the skin and eventually travel to the liver via the blood stream. Feeding on the host's blood, the parasites mature and move through the veins to other parts of the body such as the bladder and intestines. During their lifetime, which can be decades, they can produce hundreds of eggs per day. Some of the eggs are excreted in urine or feces, then hatch and infect more snails.

What are the symptoms of schistosomiasis?

The body's immune response to the eggs, which remain in the body, is the main cause of the disease. The immune response is the body's natural defense mechanism to foreign invaders and normally causes temporary inflammation of the affected tissues. However, the disease causes continued inflammation, which damages the affected organs and so the problem becomes more severe. Schistosomiasis can affect various organs such as the liver, spleen, intestine, and kidneys, and can lead to death. One species of Schistosoma can also cause bladder cancer.

How many people are affected by schistosomiasis?

700 million people worldwide are at risk of getting schistosomiasis. Currently over 207 million people in 74 countries are infected. As many as 200 thousand die each year from the disease.

Are any animals involved in Schistosoma transmission?

Fresh water snails are the primary carriers of Schistosoma. In addition to humans, other wild and domestic animals can be infected, in some cases acting as a reservoir for the disease.

About 200,000 people die from schistosomiasis, primarily due to kidney failure and haematemesis (vomiting blood).

What areas of the world are affected by schistosomiasis?

Schistosomiasis is most common in Asia, Africa, South America, and in tropical areas with freshwater snails.

Is there a vaccine for schistosomiasis?

There are currently no vaccines available for schistosomiasis.

What does the screensaver look like for Say No to Schistosoma?

Here is a video capture of the Say No to Schistosoma graphics:

Screen saver/Graphics: Where may I download pictures of the Say No to Schistosoma graphics? 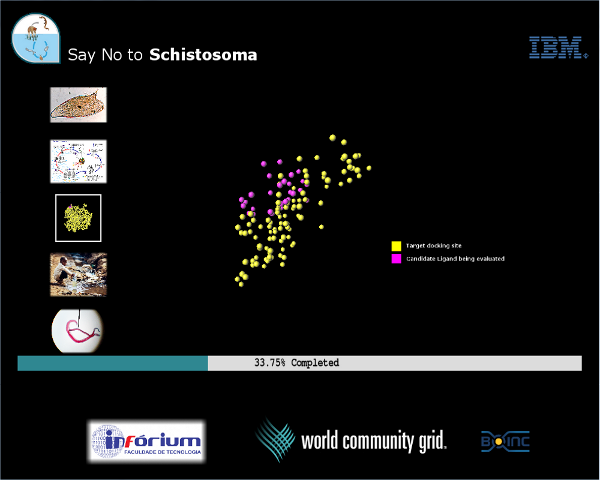 The screen saver will cycle through sixteen images. In the graphic above, the right portion of the screen saver reflects the atoms in both the target molecule and drug candidate molecule currently being processed by your device. Each ball represents an atom. However, only a limited number of atoms are shown when the molecule is very large.

The five images on the left portion of the screen saver are thumbnail versions of the recently viewed, currently viewed and upcoming images to be viewed on the right of the screen. There are sixteen total images which are self-explanatory or have text included. The screen saver cycles through these showing the molecule picture after every fourth or fifth image.

Screen saver/Graphics: What does the Say No to Schistosoma logo represent?

The Say No to Schistosoma logo represents the stages of the life cycle of Schistosomiasis.

How is my computing time helping fight schistosomiasis?

There are many approaches that can help combat not only schistosomiasis, but many infectious diseases, whose genome is sequenced and proteins annotated. Using computational methods or bioinformatics, it is possible to predict or identify molecules that are essential to the survival of these organisms, so they can be then evaluated as drug targets or vaccines. Furthermore, it is also possible to identify whether a drug could interact and inhibit an essential protein of the parasite, in order to kill it or to stop its multiplication. For the design of new drugs, it is very useful to identify molecular targets in microorganisms, and then based on these targets, to design new drugs or evaluate some previously synthesized and used for other purposes. The availability of the complete genome of Schistosoma (http://www.sanger.ac.uk/resources/downloads/helminths/schistosoma-mansoni.html) will facilitate prediction of critical or important gene products, such as those involved in pathways or metabolic essential processes for the Schistosoma parasite.