Why is solar energy important?

It is expected that by the year 2050 the world's energy requirements will be twice today’s demand. Energy is without doubt a prerequisite for economic stability in both the developed and developing world; however, despite its importance, the actual energy system is far from being self-sustainable. Achieving a completely sustainable energy system will require technological breakthroughs that radically change our paradigms on how we produce and use energy. A possible solution to this problem is solar energy. Every hour, enough solar energy reaches Earth to supply our energy need for an entire year. Finding the means to convert the incident solar energy into usable forms to maintain current ways of life represents a main objective of The Clean Energy Project.

How does an organic solar cell work?

Understanding the properties of new materials that are the basis of alternative sources of renewable energy represents one of today’s major scientific challenges. Many of these materials are composed of large organic molecules that contain hundreds of atoms. These atoms can be rearranged in multiple ways to fine-tune the properties of the desired material. With the aid of World Community Grid, researchers will evaluate the conductive properties of at least 1,000,000 molecular structures (created by combinatorial methods) that are suitable for organic solar cells applications. The results of such an enormous number of computations will be used to create a public database of molecular properties for data mining.

What is the efficiency in a solar cell?

Solar cells are commonly characterized by the percentage of the incident solar light that they can convert into electrical power. Thus, the efficiency is given as a percentage. In general, the efficiency is determined by the material from which the solar cell is made and by the technology used to construct it. Efficiencies for commercially available solar cells range from about 5% to about 17%. Although inorganic-based solar cells have reached a maximum efficiency of up to 40%, these are expensive to produce and pollute when thrown away. The maximum efficiency reached for organic-based solar cells is around 8% as of 2010. Therefore, there is still a lot of work to be done to improve them.

If researchers could find an organic-based solar cell whose efficiency reached 10%, these cells would be commercially feasible and would revolutionize the field of solar materials. Additionally, if these cells covered 0.16% of the surface of the planet, they would produce about an additional 20 TW (Terawatts, a trillion Watts), which would make up for the estimated increase in energy for the year 2050.

What other technological applications will be relevant to this project?

Another technological application that will spawn from this project is the study of molecular electronics, where molecules are used for building electronic components. A good organic semiconductor for solar cells would also be good for potential applications in molecular electronics such as transistors. This means that The Clean Energy Project (CEP) has a potential to extend Moore's Law.

The CEP also plans to host a range of other calculations for cleaner energy capture and storage such as solar concentrator and polymer fuel cell. It is only with your help that researchers will be able to pursue these pure and applied directions of research.

What does the screensaver look like for The Clean Energy Project - Phase 2?

Here is a video capture of the computing for clean water graphics:

Screen saver/Graphics: Where may I download pictures of The Clean Energy Project - Phase 2 graphics? 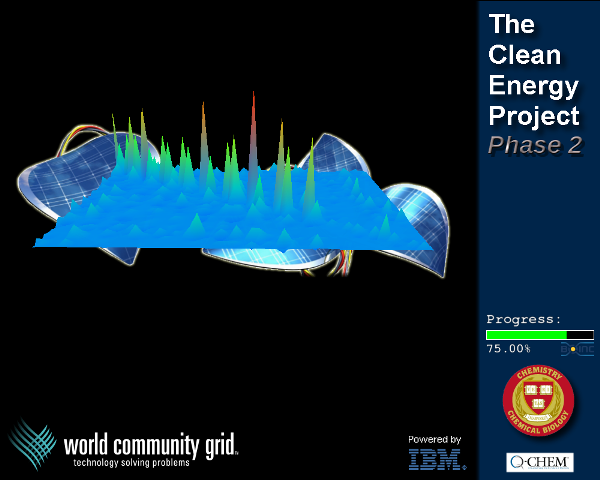 Screen saver/Graphics: How are The Clean Energy Project plots on the screen saver created?

The 3D graph of the screen saver plots the evolution of a matrix that is being diagonalized by Q-Chem to obtain the electronic structure of the molecules. The size of this matrix is determined by the size of the molecule (i.e. number of electrons and number of nuclei) as well as the accuracy of the calculation. For example, a bigger molecule as well as a calculation with better accuracy would result in a bigger matrix. The spikes in the graph represent the magnitude of each matrix element.

A set of parameters can be extracted from this matrix once the diagonal elements no longer change and most of the off-diagonal elements are minimized. These will reveal the electronic structure of the molecule. Understanding the electronic structure of the candidate molecules is crucial for predicting solar cell properties such as light absorption, conduction and stability.

Screen saver/Graphics: What is Q-Chem?

Screen saver/Graphics: How can we increase awareness of energy and environment?

Everyone knows that fossil-based energies are finite and can be exhausted in the near future, no question about it. But, how can we help to maintain the energy needs of today and the future? To increase our awareness of this problem, The Clean Energy Project team at Harvard University decided to create animated images, or "scipplets" (science applets), that show factoids of the current and future energy needs of today’s society.

Screen saver/Graphics: What are The Clean Energy Project "Scipplets" all about?

"Scipplets" stands for Science Applets. "Scipplets" appear as pictures on the screen saver. In these pictures, we include energy-related facts that represent the main motivation of our project. Also, we expect to incorporate more "scipplets" as the project moves along, so that they become an informative tool for those interested in knowing more about alternative sources of energy.

"Scipplets" is a new word coined by Harvard which stands for SCIence and aPPLET.

Screen saver/Graphics: What is a gigajoule (GJ)?

A gigajoule is a unit of energy. You can break the word into "giga" and "joule". "Giga" is a Greek prefix used to denote 1,000,000,000 and a joule (J) is a unit of energy (equal to the amount kinetic of added to a one kilogram object to which one newton of force is applied as the object moves one meter in the direction of the applied force).

This is our rendition of a solar cell modeled after a plant. It actually represents our goal for the project in the sense that we are working to discover materials that will be able to convert solar energy into a useable energy, as plants do every day.

How does The Clean Energy Project benefit humanity?

The Clean Energy Project is focused on understanding the fundamental science of how flexible solar cells work, so scientists can design more efficient energy-related technologies. The results of the project will eventually help us reduce our dependence on fossil fuels to lower our carbon emissions, keep our air cleaner, and contribute to the fight against global warming. Our research will facilitate the development of cheap, flexible solar cell materials that we hope will be used worldwide.

Why is Phase 2 of the Clean Energy Project an opt-in project?

These calculations require work units that may run longer, have higher memory, disk space and data transfer requirements. Therefore, we are providing the users the option to opt-in to the project.

In addition, The Clean Energy Project is the first World Community Grid project to use an external server. That is, your result data is directly uploaded to the Harvard research server. Security checks are in place to make certain that uploaded data is transferred correctly and validated by the Harvard research server that is receiving the data. World Community Grid controls which servers the data is sent to and the Harvard servers will not send data files to the member machines.

Therefore, if you're interested in advancing the science of solar cells, please help us out in this great effort!

Who are the people in the picture on the World Community Grid - BOINC Manager?

The people in this picture are The Clean Energy Project research team from Harvard University.