How is malaria transmitted?

How is malaria currently controlled?

Since the female Anopheles mosquitoes tend to feed on human blood at night, insecticide-treated bed nets are a common tool that helps prevent malaria infections. The bed net makes it harder for mosquitoes to bite people, and the specific insecticide that coats it can kill some of the mosquitoes. Insecticides are also sprayed indoors to help kill or deter the mosquitoes. These strategies are called “vector control,” since they focus on decreasing the ability of mosquitoes (the vector) to spread the infection to humans. Although these approaches can help decrease the spread of malaria, malaria infections are still very widespread. In addition, mosquitoes that are resistant to the insecticide can eventually arise, similar to the way in which malaria parasites that are resistant to the drugs eventually evolve.

After a person has become infected with malaria, "chemotherapeutic approaches" are employed (that is, a drug or a combination of different drugs is used to cure the malaria infection). There are many different drugs that can be used to cure malaria infections; however, the parasites that cause malaria eventually evolve “drug resistance” against the specific chemicals that are used to eliminate the parasites (see the FAQ below on “multi-drug-resistant mutant superbugs”). For example, in the past the drug chloroquine was very useful for curing malaria infections, but the Plasmodium parasites eventually evolved drug resistance against chloroquine. Later, the dual drug combination of sulfadoxine plus pyrimethamine was developed. For several years it was very useful for curing malaria infections, and it helped save millions of lives. But then the Plasmodium parasites evolved resistance to this dual drug combination, too. Since resistance to sulfadoxine plus pyrimethamine started becoming very prevalent, the World Health Organization now recommends that artemisinin-based combination therapies (“ACTs”) be used to treat malaria infections. Unfortunately, Plasmodium falciparum parasites that are able to resist treatment with artemisinin, and its derivatives, have recently started to appear at the Thai-Cambodian border. The drug resistance phenomenon is the reason why discovering and developing new drugs that can eliminate multi-drug-resistant malaria infections is a global health necessity, and it’s the reason why we created the GO Fight Against Malaria project.

What are the symptoms of malaria?

When the Plasmodium falciparum parasites infect red blood cells, which the parasites use for food and then burst, the symptoms of malaria start to appear. Fevers, headaches, and vomiting are common symptoms of malaria, and these symptoms tend to appear within ten to fifteen days after the person is bitten by an infected mosquito. Other symptoms of malaria include shivering, convulsions, joint pain, retinal damage, an enlarged spleen, an enlarged liver, hypoglycemia, renal failure, and anemia. Whitening of the retinas can also be associated with “cerebral malaria,” which can sometimes help doctors tell the difference between malaria and other causes of fevers. Since the parasite diminishes the patient’s supply of red blood cells, it starts to cut off the supply of nutrients that are needed for the patient’s internal organs to function properly. If the malaria infection is not treated promptly and properly, then malaria can lead to comas and death. Even if malaria does not kill the infected patient, it can still cause severe brain damage and other developmental impairments.

How many people are affected by malaria?

Yes, malaria infections kill almost one million people each year, and most of those who die from malaria are children under the age of five. Every 30 to 45 seconds, a child dies of malaria.

What areas of the world are affected by malaria?

Malaria thrives in tropical and subtropical regions. Malaria infections are found in at least 106 different countries. It predominantly infects people in Africa, South-East Asia, and South America. However, in this era of globalization, it affects almost all sub-populations of the world, either physically, mentally, or monetarily. Millions of people from developed countries visit or work in malaria-infested regions each year.

Is there a vaccine for malaria?

There is not yet an approved vaccine for malaria, but this is an active area of research being performed by many labs throughout the world. Recently, progress has been made in the development of a vaccine to protect children against malaria infections. This new vaccine, called “RTS,S,” is made by GlaxoSmithKline, and in a pilot study it decreased the risk of severe malaria infections by almost 50%. Although this new vaccine represents very exciting progress against malaria, the general goal for vaccine development is to reduce the risk of infection by at least 90%. Thus, more work still needs to be done to effectively prevent malaria infections.

What is the life cycle for the malaria parasite?

What is GO Fight Against Malaria?

GO Fight Against Malaria is a project of the Olson laboratory (http://mgl.scripps.edu). The project uses distributed computing to help accelerate research on the discovery of new drugs which can cure infections of multi-drug-resistant mutant “superbugs” of Plasmodium falciparum, the parasite that causes the deadliest form of malaria.

What are multi-drug-resistant mutant superbugs?

Being “resistant” to a drug means that the specific target protein molecule, whose activity the drug blocks, has mutated (changed), which makes the drug lose its effectiveness at treating the infection. But at the same time, the mutation does not prevent the superbug from surviving and reproducing. Being “multi-drug-resistant” means that the pathogen has acquired mutations that allow it to escape treatment with multiple different types of drugs, while still allowing the pathogen to survive and multiply. Since the ability to escape treatment by the drugs helps the parasites survive and multiply, drug-resistant strains of the parasite have a selective advantage and become widespread throughout the malaria-infested regions.

How do I join the GO Fight Against Malaria project?

Joining the GO Fight Against Malaria project and the other projects at IBM’s World Community Grid is a simple process. Detailed, step-by-step instructions are available at: http://www.worldcommunitygrid.org/reg/viewRegister.do. After installing BOINC and registering to become a member of World Community Grid, your computing device is then automatically put to work on these projects, and you can continue using your device as usual.

How does the GO Fight Against Malaria software work?

The GO Fight Against Malaria project uses software that automatically downloads small amounts of input data and then performs calculations that model how well different drug candidates interact with various molecular targets from the malaria parasite. After your device finishes one set of calculations, the results are sent by World Community Grid to a computer at The Scripps Research Institute. The Scripps research team then analyzes the results produced by all of the different donor machines on World Community Grid.

This project uses AutoDock 4.2 and the new AutoDock Vina computer software to evaluate how well each candidate compound (molecule) attaches ("docks" or "binds") against a malarial target (usually a protein molecule.) Millions of candidate compounds will be tested against 14 different molecular drug targets from the malaria parasite in order to discover new compounds that can block (inhibit) the activity of these multi-drug-resistant mutant superbugs. These candidates will be tested by docking flexible models of them against 3-D, atomic-scale models of different protein drug targets from the malaria parasite, to predict (a) how tightly these compounds might be able to bind, (b) where these compounds prefer to bind on the molecular target, and (c) what specific interactions are formed between the candidate and the drug target. In other words, these calculations will be used to predict the affinity/potency of the compound, the location where it binds on the protein molecule, and the mode it uses to potentially disable the target. Compounds that can bind tightly to the right regions of particular proteins from the malaria parasite have the potential to “gum up” the parasite’s machinery and, thus, help advance the discovery of new types of drugs to cure malaria.

What are AutoDock 4.2 and AutoDock Vina?

These are two different types of “docking” programs, which allow us to computationally search for new compounds that might be able to bind to and block the activity of molecular drug targets from the malaria parasite. Both of these docking programs were created and developed by the Olson lab at The Scripps Research Institute (http://mgl.scripps.edu).

How do these docking programs work?

AutoDock is a suite of automated docking tools designed to predict how “small molecule compounds,” such as substrates or drug candidates, bind to a receptor (target) of known 3-D structure and to estimate how tightly that small molecule binds to that receptor. That is, it predicts both the small molecules “binding mode” and estimates its potency against the target. The AutoDock algorithm is essentially a high dimensional stochastic search utilizing a “Lamarckian genetic algorithm” approach with flexible models of the small molecules. When docking any given drug candidate against a particular protein target, the space of all possible configurations must be explored to find the best energetic fit between the two molecules. Any given docking protocol must explore all possible degrees of freedom that are specified in the system. AutoDock consists of two main programs: autodock performs the docking of each compound against a set of grid maps that describe the energetic landscape of the target protein, and autogrid pre-calculates these grid maps before autodock is run, which greatly increases the speed of the autodock phase of these calculations.

AutoDock Vina also uses pre-calculated grid maps (which are generated internally, instead of using a separate program, such as autogrid). Vina also uses flexible models of the small molecules, and it also treats the docking process as a stochastic global optimization of the scoring function. But Vina utilizes a different scoring function and a different search algorithm than AutoDock, and Vina’s search process is guided by the gradients in the energetic landscape of the target protein (unlike AutoDock4.2).

Will my device only be working on the GO Fight Against Malaria project?

You get to decide which project or projects your computing time will help advance; however, only some projects are available for mobile devices. You can select from the active projects that are being performed on World Community Grid by visiting the My Projects page. Follow that link, and you can view all the available projects and choose those in which you want to participate.

How can I learn more about malaria?

More information about malaria can be found at the World Health Organization’s website, the Medicines for Malaria Venture website, and on Wikipedia.

What does the screensaver look like for the GO Fight Against Malaria?

Here is a video capture of the GO Fight Against Malaria project graphics:

Screen saver / Graphics: Where may I download a high-quality picture of the GO Fight Against Malaria graphics?

You may download this picture by clicking any of the resolution links below of the example screen shot. 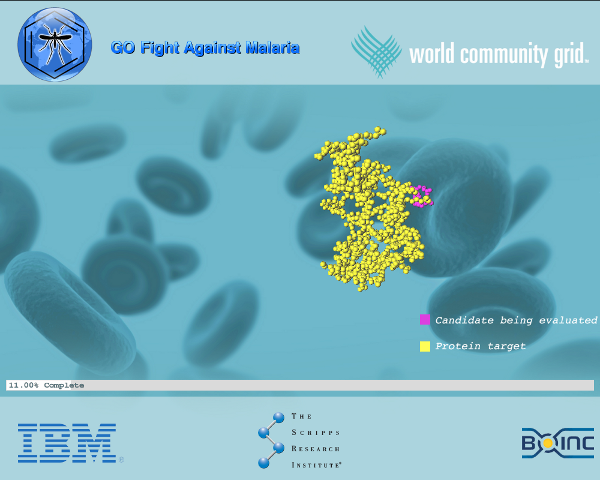 The screen saver shows the target and drug candidate molecules, depicted with small spheres representing a subset of the atoms that make up the molecules. These are the molecules the program is working on with your device.

Screen saver / Graphics: What does the GO Fight Against Malaria logo represent?

The circular logo shows a world map in the background, a mosquito in the center, and surrounding hexagonal lines representing a common organic chemistry bond structure for a benzene ring. This logo represents the GO Fight Against Malaria project at The Scripps Institute in La Jolla California, USA.

Screen saver / Graphics: What does the progress bar represent?

Screen saver / Graphics: What do the rotating balls represent?

The small spheres represent a subset of the atoms in both the target molecule and drug candidate molecule currently being processed by your device.