Cancer has some powerful enemies.
Join them.
Contribute to this Project

He built his first computer at the age of 8. By the time he was 11, he had built 20 computers and founded his own company.

Then his father was diagnosed with brain cancer. 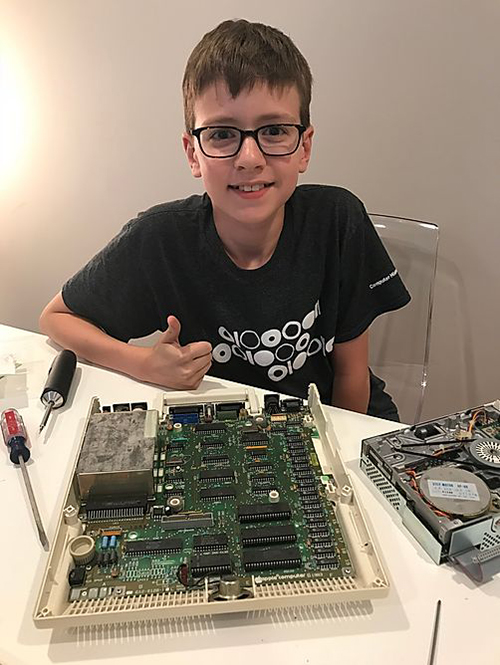 So Sawyer did some research, found World Community Grid, and created his own team to support the Mapping Cancer Markers project, called Sawyer's Cancer Fighting Network.

The team's goal is to donate 1,000 years of computing time to Mapping Cancer Markers by September 2020. Anyone with a computer or Android device and an internet connection can help.

What is World Community Grid?

We're an IBM social impact initiative that connects researchers with free and massive computing power, donated by volunteers around the world, to advance scientific research on our planet's most pressing issues. Anyone with a computer or Android device can sign up to participate. To date, more than 750,000 individuals and 440 organizations have contributed more than 2 million years of computing power to support 30 research projects, including studies about improving treatments for cancer, low-cost water filtration systems and new materials for capturing solar energy efficiently.

Our research partners have published over 50 peer-reviewed scientific papers in journals including Science, Nature and PLOS. This crowdsourced computing power, which is provided to researchers for free, often allows them to take on research efforts at an unprecedented scale, pursue new research approaches and get the work done in years instead of decades.

How does World Community Grid work?

Scientists from institutions all over the world come to us with research projects that need massive amounts of computing power. For example, when scientists at Krembil Research Institute wanted to study cancer biomarkers, they contacted World Community Grid. We integrated the scientists' chosen modeling software program into our platform, and now we distribute millions of virtual research experiments for Mapping Cancer Markers to World Community Grid volunteers, whose computers and Android devices automatically perform these simulated experiments. World Community Grid validates and bundles the results of these simulations and sends them back to the researchers.

Through World Community Grid, scientists can not only access massive computing power at no cost, but can also engage the public in their research.

What is the Mapping Cancer Markers project?

Cancer starts due to genetic or environmental changes that interfere with biological mechanisms that control cell growth. These changes can be detected in tissue samples through the presence of their unique chemical indicators, such as DNA, proteins or metabolites, which together are known as "biomarkers." A group of such biomarkers is referred to as a signature.

The pattern of biomarkers can determine whether an individual is susceptible to developing a specific form of cancer, and may also predict the progression of the disease, helping to suggest the best treatment for a given individual. For example, two patients with the same form of cancer may have different outcomes and respond differently to the same treatment due to their unique genetic profile, in combination with potentially different lifestyles.

While several biomarkers are already known to be associated with certain cancers, mostly identifying patients at risk (e.g., BRCA1 or BRCA2 mutations for breast and ovarian cancer), there are many more to be discovered. Computational research can help speed up the discovery process, but researchers need massive amounts of computing power to make this possible.

How could the Mapping Cancer Markers project help people with cancer?

By refining the process of identifying cancer markers, this project can help researchers and physicians to detect cancer earlier, identify high-risk patients, and to customize treatments based on a patient's personal genetic profile.

What commitment do scientists make in return when they get computing power through World Community Grid?

In return for free computing resources from volunteers and technical support from IBM, scientists agree to support our open data policy by publicly releasing the research data from their World Community Grid project. This enables the global scientific community to benefit from and build upon their findings. Research teams also agree to engage the volunteers in their research through regular communications through World Community Grid communication channels.