The Mapping Cancer Markers project now includes markers for the most common form of ovarian cancer, with a goal to understand the how this disease progresses from early-stage to late-stage. 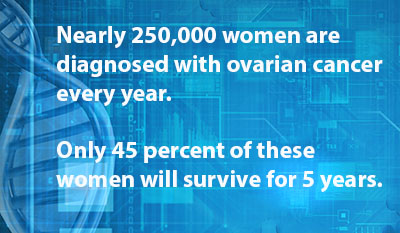 The Mapping Cancer Markers project, which had been concentrating on lung cancer, now includes work units related to ovarian cancer. The researchers are seeking to identify the genes that are important in differentiating between early-stage and late-stage ovarian cancer.

The Goals of Mapping Cancer Markers

Cancer is caused by genetic or environmental changes that interfere with biological mechanisms that control cell growth. These changes can be detected in tissue samples through the presence of their unique chemical indicators, such as DNA and proteins, which together are known as "markers." Specific combinations of these markers may be associated with a given type of cancer. Additionally, the pattern of markers can determine whether an individual is susceptible to developing a specific form of cancer, and may also predict the progression of the disease, helping to suggest the best treatment for a given individual. In order to identify these markers, the project is analyzing millions of data points collected from thousands of healthy and cancerous patient tissue samples.

Around the world, nearly 250,000 women are diagnosed with ovarian cancer each year, and it is responsible for 140,000 deaths each year. Statistics show that just 45 percent of women with ovarian cancer survive for five years. The main types of ovarian cancer are epithelial, germ cell and stromal cell, with the epithelial type accounting for roughly 85-90 percent of all cases. Ovarian cancer often goes undetected in early stages due to the disease being confined to the ovary, the subtlety of the symptoms, and the lack of an effective screening tool. Therefore, most presentations of the disease are detected in late stages or once the cancer has spread outside the ovary, making treatment less effective and less likely to succeed. It is for these reasons that we have chosen epithelial ovarian cancer as our next area of study.

Understanding the Progression of Ovarian Cancer

In the next stage of Mapping Cancer Markers, we will attempt to identify important genes in defining the differences between early and late-stage cancers. There is a strong correlation between survival time and cancer stage; patients with early-stage cancer tend to have longer lives. We will be using a curated database of ovarian cancer survival data developed by researchers around the world as a starting point.

As compared to the earlier work of Mapping Cancer Markers, where we studied lung cancer, this phase will have a larger and more complex dataset. We estimate that the number of "experiments" we can perform within a single work unit will be much less, as each experiment will take longer to solve. Although the dataset is larger, that means that we are able to use our algorithm against many more points of data, which will hopefully return a very clear result.

We thank the thousands of World Community Grid volunteers who have supported this project since its launch in 2013, and look forward to continuing to work with you as our research progresses.