The GO Fight Against Malaria project team has been making good use of the calculations which were conducted by our volunteers and that concluded in summer 2013. Their findings have sparked progress against not only malaria, but tuberculosis as well. They have one paper published and two more about to be submitted. They continue their work to publish their findings, after which they will resume the analysis on and experimental assessment of the massive amount of data generated by World Community Grid volunteers. 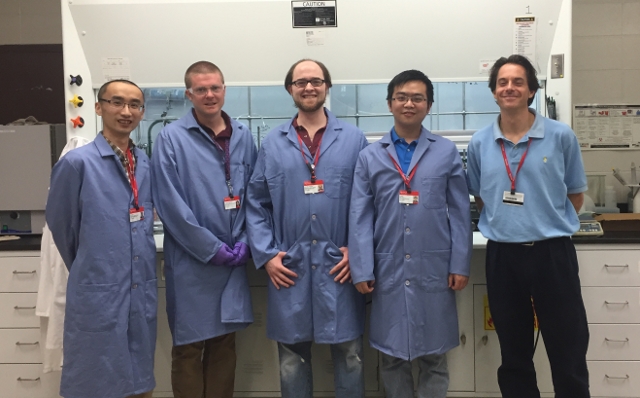 The Global Online Fight Against Malaria (GO FAM) project was launched on the IBM World Community Grid on November 16, 2011. The first phase of the docking calculations was completed in July of 2013, and since then we have been busy analyzing, testing, publishing, and extending these results, which show promise against both malaria and tuberculosis. For a summary of the project, see our last project update from July 2014.

Tuberculosis, a bacterial disease caused by Mycobacterium tuberculosis, kills 1.5 million people each year. A third of the world’s population already has the latent form of the infection, which creates an immense reservoir for re-activation and the emergence of new mutated versions of this deadly bacteria. Although drug-resistant “superbug” versions of tuberculosis were not a significant problem a couple decades ago, Mycobacterium tuberculosis becomes more and more resistant to the current drug treatments each year. There is thus an urgent need to discover and develop new types of drugs that can defeat these drug-resistant tuberculosis “superbugs.”

Update on: GO FAM experiment leads to the discovery of new hits against a key drug target for tuberculosis

In our last update in July of 2014 (see the link above), we mentioned that we were halfway done writing our first research paper that utilized GO FAM results. On January 30, 2015, that paper was published in the Journal of Chemical Information and Modeling. In relation to this paper, we also created an animation of the predicted binding mode of the best inhibitor we discovered in that GO FAM experiment versus a critical drug target for treating tuberculosis.

In March of 2015, Professor Peter J. Tonge and I submitted this manuscript to “PubMed Central,” which means that a free version of this paper will be available to the public next January or February.

Update on: Discovery of additional new hits against a target for drug-resistant tuberculosis

Last July we discussed the initial progress from analyzing and testing the results of GO FAM experiment 9: specifically, the subset of these results that were generated against a key drug target for treating tuberculosis, which is an enzyme called “InhA.” We mentioned that derivatives of the best two “hits” we discovered had been designed in the Freundlich lab. Dr. Shao-Gang Li and Dr. Steven Paget have now synthesized several different “analogs” of these two new hits. These “analogs” are slightly different chemical compounds that involve removing or replacing different regions of the inhibitors, to learn which structural features are involved in increasing or decreasing the potency of the original “parent” compound. These analogs of the top two hits were then tested in enzyme inhibition assays by Tom Stratton (a top-notch undergraduate researcher in the lab) and Xin Wang (a very skilled graduate student in the lab). Xin Wang also tested these compounds in assays that measure the inhibition of Mycobacterium tuberculosis growth and in a different type of assay that measures toxicity to mammalian cells. Our best hit overall is able to inhibit the growth of Mycobacterium tuberculosis, and it is relatively non-toxic to mammalian cells. To enable us to submit these results for publication in one of the best journals, Tom, Shao-Gang, and Steve also performed additional quality control measures on the compounds that were synthesized in the Freundlich lab (i.e., the analogs and locally re-synthesized versions of the original hits). These quality control measurements included “high resolution mass spectroscopy,” LC-MS (liquid chromatography coupled to mass spectrometry), and NMR (nuclear magnetic resonance spectroscopy), which established the molecular weight, purity, and structures of the compounds that were synthesized in the Freundlich lab. We are now almost done writing the paper on these exciting new results and promising compounds, which we were able to discover using a very novel computational workflow, including the work on World Community Grid. We plan to submit this paper within the next month. As soon as it is published, we will let you know.

“Translational research” is the process of advancing research from the basic science (fundamental background studies) stage to the development of new drugs or other tools that can improve public health. A critical hurdle to the progress of translational research against many different diseases, including malaria, tuberculosis, cancer, and Alzheimer’s disease, involves proving that a compound is both effective and non-toxic in animal studies that serve as an early model/surrogate for the afflicted human patients. For a compound to have any chance of becoming part of a pill that can treat humans, one key feature that it must possess is sufficient metabolic stability (the compound must not be degraded too rapidly after it is administered to a mammal). Consequently, we used “machine learning” techniques to construct, test, and validate new computational models that can help us increase the efficiency of discovering and developing new compounds that display a sufficient amount of metabolic stability. This research (and the previous section on GO FAM experiment 9) was performed in collaboration with Dr. Sean Ekins, of Collaborations in Chemistry (Fuquay-Varina, North Carolina) and Collaborative Drug Discovery (Burlingame, California).

This project on predicting metabolic stability was mainly funded by the “Center to develop therapeutic countermeasures to high-threat bacterial agents,” which is a multi-lab grant from the NIH Centers of Excellence for Translational Research.

These models did not use any GO FAM data, but these tools might enhance the pace and fruitfulness of our future research projects that use GO FAM data to advance the discovery of new compounds that can help fight tuberculosis or malaria. Since the training sets and the detailed protocols that we used to make these models will be shared with the research community when we publish this study, it might also help other scientists advance their own research against these and many other diseases. We are almost done writing the paper on this project. We plan to submit it within the next week or two. As soon as it is published, we will definitely share the news with you.

Sharing our progress with other scientists

An important aspect of being a scientist is sharing your results with the rest of the research community. Different projects, labs, and disciplines are able to assist, motivate, and inspire new directions in each other’s research. Getting critical feedback also helps one hone the research and how it is analyzed, presented, and extended. To support these goals, Dr. Perryman will be presenting the data that was summarized in this update at the 250th National Meeting of the American Chemical Society (ACS), which takes place this August in Boston, USA. Tom Stratton, Dr. Shao-Gang Li, and Professor Joel Freundlich will also be presenting research at this ACS conference as well.

To help Ph.D. students learn about drug discovery, and to try to inspire them to pursue research that can help advance the fight against infectious diseases, Dr. Perryman recently taught some sections of Professor Joel Freundlich’s new class on “Critical Readings in the Chemical Biology of Pathogens” at the Rutgers University-NJ Medical School.

Thank you to all our supporters

We hope you’re as excited as we are to see the many different ways that your donated computing time has helped advance important scientific research. As is so often the case, the eventual impact of the research wasn’t known at the beginning, and we only arrived at these beneficial outcomes because you cared enough to support our project. On behalf of the entire team, thank you, and please check back for future updates!