Although work continues, enough data has already been processed to let the Mapping Cancer Markers team begin identifying high-scoring signatures and associating them with particular lung cancer biomarkers. The ultimate goal is to find signatures that distinguish many types of cancer, giving physicians and researchers another tool to improve detection, treatment and patient outcomes.

After a long first stage of exploratory analysis, Mapping Cancer Markers (MCM) began a new, more targeted stage of lung cancer analysis in April 2015. Processing results from the first stage revealed a subset of approximately 1% of the biomarkers that frequently occur in high-scoring signatures. The second stage of the MCM lung cancer study will focus on signatures drawn from this subset of biomarkers.

Enough second-stage results have been returned to allow us to start the preliminary analysis. One main goal of the second stage is to discover high-performing cancer signatures. We used results from the first stage to narrow the field of potential biomarkers from 22,000+ to a subset of 223. Figure 1 shows how the average cancer-distinguishing ability of the stage-2 gene signatures has improved considerably, compared to signatures discovered in the initial stage. 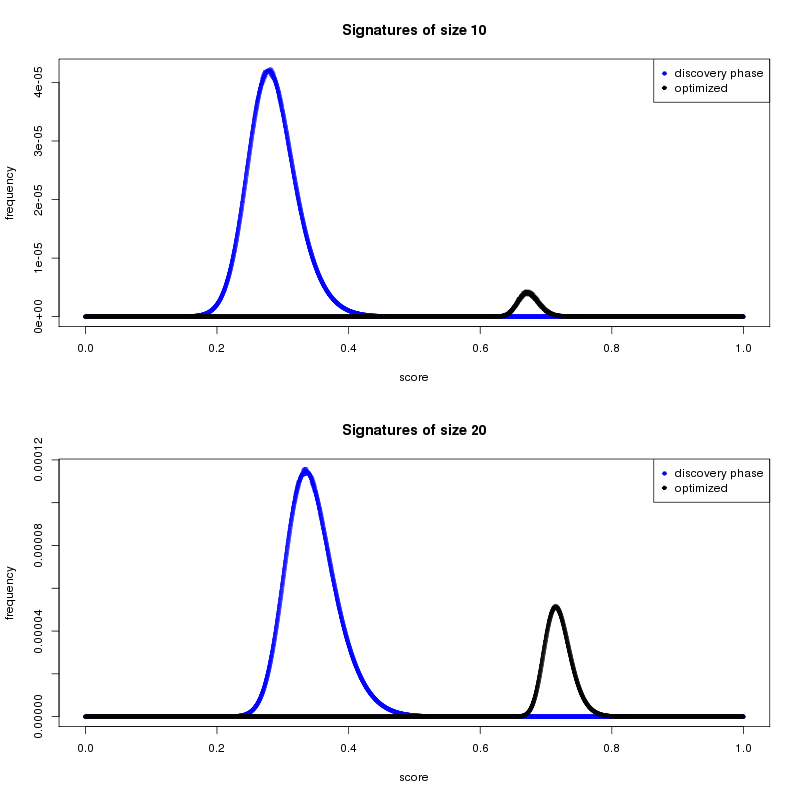 Figure 1. Distribution of signature scores, stage 1 vs. stage 2, by size. Signature frequencies are drawn in blue for stage 1, black for stage 2. Note the increase in the quality of scores in both stages between signatures of length 20 vs. length 10, as well as increase in frequency of higher quality scores.

One of the questions that the volunteer community might be asking is why we continue to focus on shorter gene signatures when the trend in the data shows that the longer gene signatures are performing better. Despite this trend, a larger gene signature may be more predictive but not always better. One reason is practical. Much of the work in the field of biomarker identification has the ultimate goal of producing a signature that can be translated into a clinical test. Feasibility and economics will play an important role at that stage. The process of moving a research-based result through testing and approval is lengthy and complex, so a 10 gene signature is easier and cheaper to translate than a 65 gene signature. The viability of gene signature sizes has roughly guided how we define our lower and upper size search limits for the MCM project.

One of our goals in the analysis of gene signatures is to look at smaller combinations of genes, and identify groups of genes that relate to patient outcome in a similar manner (i.e. they may provide alternative choices for the signature). This is important for a variety of reasons. From the analytical side, if we can find two genes that perform almost exactly the same, then a successful gene signature will likely have only one of those. This will help us reduce search space, but also to find alternatives. From the practical side, one of the two (or more) alternatives may be easier to bring to clinical practice. Thus, we aim to find multiple signatures, and characterize them with respect to their relationships. Another reason to look at combinations of genes involves seeing if two genes may have a biological reason for being related. Is this particular cancer affecting two genes at the same time? Is a particular biological pathway compromised? These kinds of questions might explain differences between patients or why certain people respond better to particular therapies. These are questions that are much further down the research path but we wanted to touch on them so that the community is aware of where in the pipeline your contributions have helped and also what still needs to be done. If a pair (or larger group) of genes is related by disease, signatures containing those genes or related biomarkers should perform well. Figure 2 looks at the rate at which stage-2 biomarker pairs co-occur in high-scoring signatures. 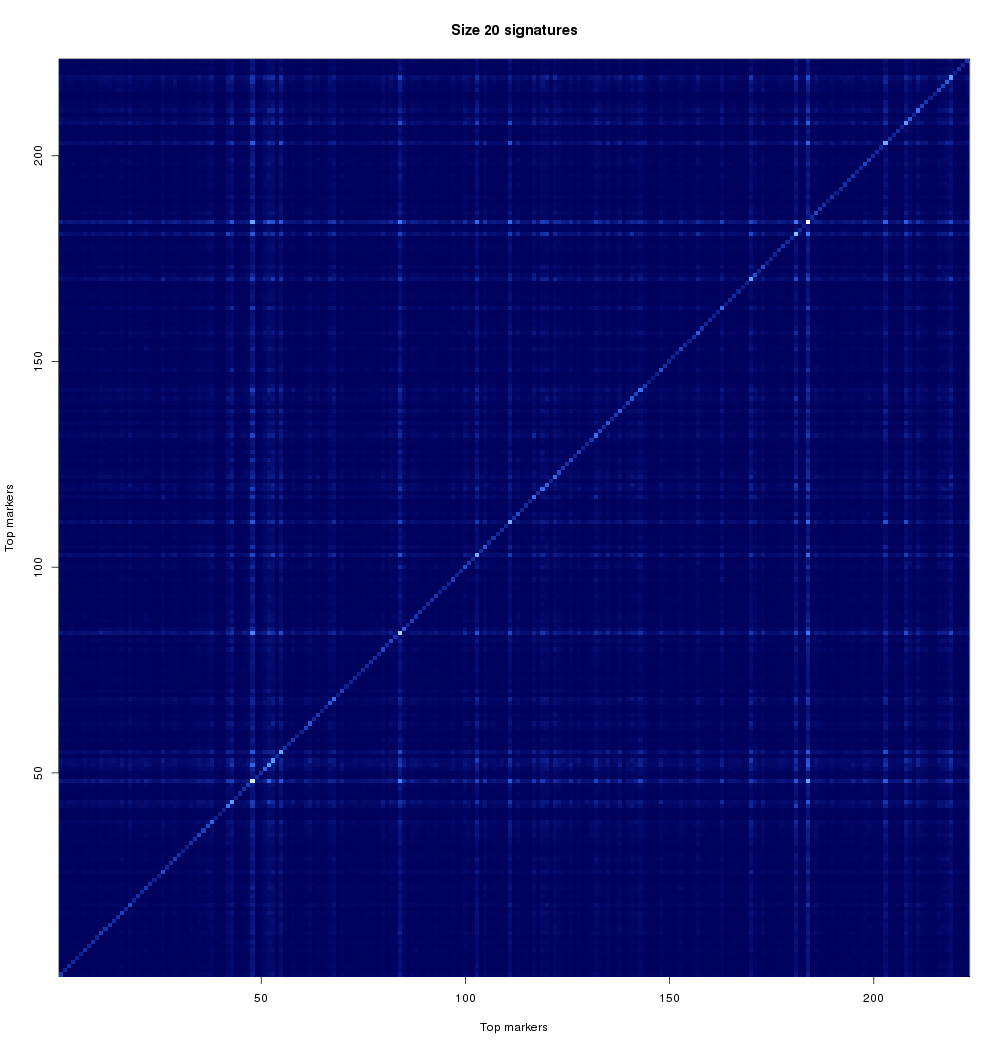 Figure 2: Frequencies of stage-2 biomarker pairs. The frequency of biomarkers i and j co-occurirng in high-scoring signatures is represented by the color of the row-i, column-j element of the matrix. Higher-frequency pairs are colored lighter blue. Note the horizontal and vertical stripes indicating specific biomarkers that perform well regardless of their pairing. Also, very bright single spots highlight biomarker combinations that are exceptionally promising.

A note on run times of research tasks

Some of you may have noticed above-average run times of work units in this new stage of MCM. We are working to make run times more consistent and predictable; however, this job is made more difficult as this stage of the research requires changing work unit designs more frequently than before. The design of new work units will also depend in part on results of earlier second-stage results. Consequently, the turnaround time for benchmarking and calibrating work units may limit our success at stabilizing run times. We trust that our wonderful volunteers will be able to continue contributing results no matter what work units we provide, but we wanted to let you know what to expect. Once again, thank you for making our research possible, and please stay tuned for future announcements!