Dr. Alessandra Carbone, lead researcher for the Help Cure Muscular Dystrophy project, recently co-authored a paper that uses World Community Grid data to shed light on how proteins function and interact with each other. 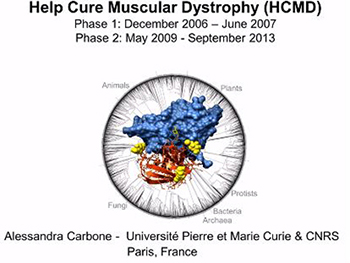 Proteins are the all-important molecules involved in biological processes and machinery in cells. Their interactions with each other and other molecules control and implement their functions. Thus it is important to understand whether they interact, and specifically how they interact. The complex surfaces of proteins present patterns of attractive and repulsive electric charges which match to a varying degree the opposite pattern of charges on other molecule surfaces. Understanding which of possibly many portions of the surface of a protein are most responsible for reactions with other molecules and proteins are key to understanding their functions.

This open-access paper describes the researchers' efforts and helpful techniques in identifying and classifying the surface interaction sites of proteins using results calculated in Phase One of the Help Cure Muscular Dystrophy project, which ran on World Community Grid from December 2006 to June 2007.

Paper Title: Great interactions: How binding incorrect partners can teach us about protein recognition and function

Protein–protein interactions play a key part in most biological processes and understanding their mechanism is a fundamental problem leading to numerous practical applications. The prediction of protein binding sites in particular is of paramount importance since proteins now represent a major class of therapeutic targets. Among others methods, docking simulations between two proteins known to interact can be a useful tool for the prediction of likely binding patches on a protein surface. From the analysis of the protein interfaces generated by a massive cross-docking experiment using the 168 proteins of the Docking Benchmark 2.0, where all possible protein pairs, and not only experimental ones, have been docked together, we show that it is also possible to predict a protein's binding residues without having any prior knowledge regarding its potential interaction partners. Evaluating the performance of cross-docking predictions using the area under the specificity-sensitivity ROC curve (AUC) leads to an AUC value of 0.77 for the complete benchmark (compared to the 0.5 AUC value obtained for random predictions). Furthermore, a new clustering analysis performed on the binding patches that are scattered on the protein surface show that their distribution and growth will depend on the protein's functional group. Finally, in several cases, the binding-site predictions resulting from the cross-docking simulations will lead to the identification of an alternate interface, which corresponds to the interaction with a biomolecular partner that is not included in the original benchmark.