Summary
In this letter to volunteers, Dr. Alessandra Carbone, the principal investigator for the Help Cure Muscular Dystrophy project, announces the release of two new open access tools which can accelerate the work of researchers who investigate protein interactions. 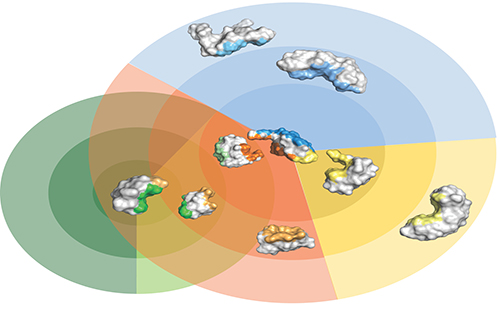 The image above is a rendering of a protein structure with three interaction binding sites (in the center, blue/orange/yellow) and its potential partners. Circles represent the level of binding affinity of the protein complexes. The figure illustrates the complexity of the general problem of "protein partners identification" treated in the Help Cure Muscular Dystrophy - Phase 2 project, where potential partners need to be identified and selected within a very large space of interactions.

I am writing to update you on the analysis of the dataset of docking conformations produced by the Help Cure Muscular Dystrophy (HCMD2) project. The project’s goal was to investigate protein-protein interactions for more than 2,200 proteins whose structures are known, with a particular focus on those proteins that play a role in neuromuscular diseases.

The complete cross-docking dataset containing these protein-protein interactions is under analysis. For this, we are using the various computational tools that we developed in parallel with the calculations run on World Community Grid.

We have built a database of protein interfaces for the scientific community. This database, called JET2, is a milestone for the identification of protein partners. Why is this important? The analysis of the HCMD1 and HCMD2 data highlights that a precise description of protein interfaces is crucial in discriminating protein partners, and the database produces a highly accurate set of such predictions. Improvement is still necessary, but the results are already very accurate.

We are now concentrating on extracting useful information relating to muscular dystrophy from the JET2 dataset that your support helped to construct. As you know, progress in research is slow, but we are making definite advances and expect that the methodological approach used in HCMD2 will be very successful in the large-scale identification of protein partners at protein-residue-level resolution! (A protein-residue is a portion of a protein.*)

BIS2Analyzer: A Server to Help Our Data Analysis

We have released a server, called BIS2Analyzer, to help identify signals of interaction based on coevolution analysis within proteins or between protein partners. This server, which is also openly accessible to the scientific community, is important because it can help to identify signals of protein interaction. It was useful to reconstruct the first protein-protein interaction network for viruses (see the reference below on the reconstruction of the network for the Hepatitis C Virus).

Thanking you again strongly for your contributions. I shall keep you updated on our results. Be assured that we are making progress, thanks to your support!