Tuberculosis is one of the world's most prevalent and deadly infectious diseases. Researchers from the University of Nottingham, UK, have partnered with World Community Grid to take a close look at the bacterium that causes tuberculosis, so that scientists can develop more effective treatments.

Tuberculosis (TB) is one of the biggest global killers. In 2014, there were 9.6 million newly diagnosed cases and more than 1.5 million people who died from the disease. More than 1 million of these new cases, and 140,000 deaths, were estimated for children. The World Health Organization has declared TB to be the world's deadliest infectious disease, along with HIV. To help combat this disease, my team and I are working with World Community Grid on a new project called Help Stop TB.

TB is caused by infection from a bacterium known as Mycobacterium tuberculosis (M. tb). Typical symptoms of an active TB infection include persistent cough, fever, loss of weight, and night sweats. If the infection is left untreated, the bacteria are likely to cause increased damage to the lungs and spread throughout the body, which may ultimately lead to death. Treatment for an uncomplicated TB infection lasts more than six months and requires a combination of antibiotics.

I am an associate professor in the Department of Chemical and Environmental Engineering at the University of Nottingham, UK. My team and I seek to improve the understanding, and therefore the treatment, of TB. To do this, we are excited to partner with World Community Grid and its community of volunteers to study and understand the protective outer coating of M. tb, and learn how to penetrate its defenses.

TB knows no boundaries. Luckily, neither does the research team that seeks to shed light on the molecular mysteries of this disease. We have come to the University of Nottingham from various parts of the world to conduct research into a disease that has a large global impact.

As a young girl in Australia, I was very interested in the chemical underpinnings of medicine and human biology. My mother was keen for me to become a physician, but I had my heart set on a career in science. I remember saying, "I will be a doctor, but not that kind of doctor." I chose to study Chemistry and Biochemistry, and became a researcher in order to have an impact on the health of a great number of people.

A few years ago, I was conducting research on mycolic acids, which are long fatty acids in the cell walls of certain bacteria, including M. tb. Through this research, I met Wilma Groenewald, who began studying TB while she was an undergraduate at the University of Pretoria in South Africa. There is a large population of TB patients in South Africa, including people with complex diagnoses, and Wilma began studying the disease to make a difference in the health of her home country.

The Help Stop TB research team also includes Athina Meletiou, who is from Greece, and Christof Jäger, hailing from Germany, who provide expertise in computational modeling and molecular dynamics. Additionally, we are lucky to work with David Burgess, who is originally from Berkshire and will oversee the IT needs of the project. We all share a determination to build on the work of previous researchers as we take on a disease that has proved to be highly resistant to most drugs. 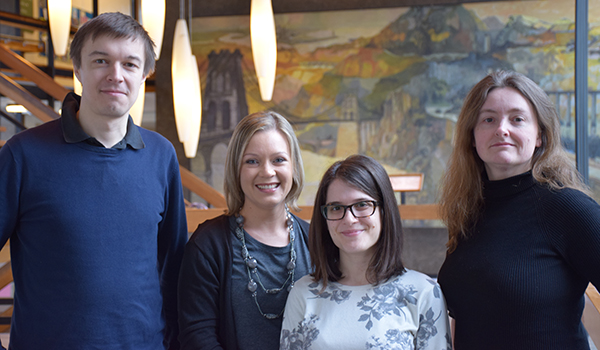 Scientists have learned that M. tb, which causes TB, has a highly unusual cell wall made up of mycolic acids, which protects it from incoming drugs and from a person's own immune system. Bacterial resistance against the drugs available to treat TB is on the increase throughout the world, and is making TB treatment more challenging. This resistance typically develops when patients don't complete their long courses of treatment, which can take from six months to two years, giving the bacteria an opportunity to evolve resistance to the drugs that were used.

Additionally, TB infection is a particular challenge in areas where HIV infection is high, because HIV patients can be susceptible to contracting TB due to their suppressed immune systems. The World Health Organization reports that in 2015, one in three HIV deaths was due to TB.

By enlisting the help of World Community Grid volunteers, we plan to simulate different variations of the mycolic acid structures within the cell wall of M. tb to understand how these variations impact the functioning of the bacterium. This will help us develop a more complete and cohesive model of the cell wall, and better understand the role these mycolic acids play in protecting the TB bacterium. This basic research will in turn help scientists develop treatments to attack the disease's natural defenses.

We would not be able to undertake the necessary big data approach to understand the structure of these mycolic acids without World Community Grid's computational power. With access to this power, we can observe many different mycolic acid structure models instead of just a few. We hope you will donate your unused computing power to the fight against one of the world's most widespread and deadly infectious diseases.


To contribute to Help Stop TB, join World Community Grid, or if you are already a volunteer, make sure the project is selected on your My Projects page.

More on this story